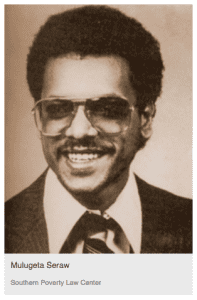 On November 13th, 2018, the Urban League of Portland commemorated the 1988 murder of Mulugeta Seraw with a multi-hour conference addressing racial- and religious-based hate. Seraw was bludgeoned to death on the street in Southeast Portland by white supremacist skinheads. The civil trial against Tom Metzger for liability in Seraw’s murder was winding up when I began writing Medicine for the Blues trilogy. It was the parallels between the white supremacy groups of the 1980s and the KKK activities of the 1920s that impelled me to complete these historical novels.

The Oct. 31st edition of Willamette Week (2018) reminded us of Seraw’s horrific murder with a cover story about what happened in Portland, Oregon, thirty years ago. One of the responses to their story read, “Skinheads never went away. They cleaned up, grew their hair back out, switched to suits and got busy integrating law enforcement, the military, and politics.” A recent FBI report states that nationally hate crimes are up 17% in 2017 over the previous year. In contrast to that national statistic, similar crimes in Washington state are up 32% and in Oregon up 40%.

In the early 1920s, there was no need for cleaning up and switching to suits. The Ku Klux Klan’s beliefs were readily accepted by a predominantly white Protestant population and quickly integrated into law enforcement and politics. Back then many local police belonged to the Klan and limiting immigration was a potent political issue. Politicians championed laws limiting immigration which were backed by the KKK, leading to the passage of the Immigration Act of 1924, or the Johnson–Reed Act. Wikipedia states that according to the U.S. Department of State Office of the Historian the purpose of the act was “to preserve the ideal of American homogeneity.”

November 11th this year marked the 100th anniversary of Armistice Day, the end of World War I, now called Veteran’s Day. Carl Holman, one of the main characters in Medicine for the Blues, is a veteran of that War. He also served in the Allied occupation of the Rhineland after the war. As a young surgeon, he experienced the horrors of WWI and the death of his lover, a fellow officer.

These historical incidents follow us, even when we are not directly aware of them. Historian Barbara W. Tuchman says that the past sits back and smiles and knows it owns the man who ignores it.