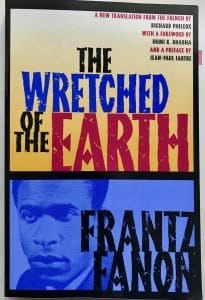 We live in a world that is being colonized by giant multinational corporations—from Giant Oil to Big Tech—and it is our duty to decolonize our minds and our actions.

Fanon: “A world of underdevelopment [is] a world of poverty and inhumanity….Facing this world, the European nations wallow in the most ostentatious opulence. This European opulence is literally a scandal for it was built on the backs of slaves, it fed on the blood of slaves, and owes its very existence to the soil and subsoil of the underdeveloped world.”

Fanon: “Two centuries ago, a former European colony took it into its head to catch up with Europe. It has been so successful that the United States of America has become a monster where the flaws, sickness, and inhumanity of Europe have reached frightening proportions.”

The USA is beginning to look like a third world country. This is evidenced by the extreme wealth gap, stagnant wages, deteriorating infrastructure, and the unhoused people sleeping on streets of cities across the country. We are witnessing the result of resource extraction by multinational corporations, many larger and more wealthy than most nations, corporations that owe allegiance only to financial profits and corporate power, not to any sovereign nation. Not only are these companies extracting natural resources like oil, coal, fracked gas, mined mineral wealth, and timber, but Big Banks are harvesting money from communities across the country and whisking it away to Wall Street where it is loaned out to finance extraction infrastructure like pipelines and Real Estate Investment Trusts that buy up forest land for clear cutting timber. This is money that could stay in local community banks and credit unions to support local small business loans and home mortgages. (Hint: Move Your Money!) These same Wall Street banks are the ones that profited from repossessing homes from the people who could not keep up with their mortgage payments during the 2008 financial meltdown that was fomented by those very banks. And today people whose wages do not keep up with the rising cost of housing or health care are still losing their homes.

But there is something even more insidious going on. Beyond Big Oil and Big Banks, Big Tech is harvesting our personal data. In World Without Mind, The Existential Threat of Big Tech, Franklin Foer writes:

“One of the cliches of our time: Data is the new oil. This felt like hyperbole when first articulated, but now feels perfectly apt.”

Facebook, Google, and Amazon are harvesting every click, every “like,” every post, every browser search, and every on-line purchase, all in order to construct a personal profile of YOU that they can sell to advertisers and political consultants.

Foer: “What counts is addicting readers to its devices and site, so that Amazon becomes a central fixture in their lives, an epicenter of leisure and consumption—exactly the same aspiration that Google and Facebook harbor.”

Foer: “Data provides an X-ray of the soul. Companies turn that photograph of the inner self into a commodity to be traded on a market, bought and sold without our knowledge.”

In his book Zucked, author, Roger McNamee, explains: “To maximize both engagement and revenues, Web 2.0 startups focused their technology on the weakest elements of human psychology. They set out to create habits, evolved habits into addictions, and laid the groundwork for giant fortunes.”

Mindf*ck, Christopher Wylie’s deeply disturbing book, expands on this:
“Every scroll is tracked, every movement is tracked, every like is tracked. It’s all there—nuance, interests, dislikes—and it’s all quantifiable. This means the data from Facebook has increasingly more ecological validity, in that it is not prompted by a researcher’s questions, which inevitably inject some kind of bias…the benefits of the passive qualitative observation traditionally used in anthropology or sociology could be maintained, but as many social and cultural interactions were now captured in digital data, we could add the benefits of generalizability one achieves in quantitative research….This means that, for an analyst, there’s often no need to ask questions: You simply create algorithms that find discrete patterns in a user’s naturally occurring data. And once you do that, the system itself can reveal patterns in the data that you otherwise would never have noticed….With ten likes, the model predicted a person’s behavior more accurately than one of their co-workers. With 150 likes, better than a family member. And with 300 likes, the model knew the person better than their own spouse….In some respects, a computer model can know a person’s habits better than they even know themselves…” 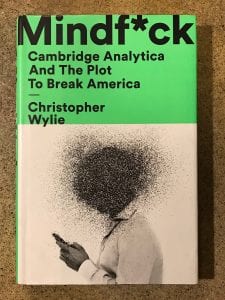 And even beyond the extraction of abundant personal information, these Big Tech companies are harvesting an even more precious resource: our time and attention.

Foer: “The more [the tech companies] can insinuate themselves into our lives the better. There is no limit.”

Foer: “The problem is that when we outsource thinking to machines, we are really outsourcing thinking to the organizations that run the machines.”

Hence our attention is colonized.

And what have we gotten for giving away our personal data and our attention? We’ve become addicted to convenience. The Web is free and as handy as the device held in every hand. Everything is a mouse click away on Amazon. Next day delivery costs only a few dollars more. With a click and a credit card, Grubhub will bring you dinner. Streaming services make a world of video available any time of day.

Foer: “…it’s not worth having free email if the price is our privacy; next-day delivery is nice, but not if the consequence is a sole company dominating retail, setting the market price for goods and labor.”

Foer: “We have deluded ourselves into caring more deeply about convenience and efficiency than about the things that last.”

In the words of the 1960s rock band The Soft Machine:

“It begins with a blessing
and it ends with a curse:
making life easy
by making life worse.”

So what are we to do? Foer believes there is hope:

“…a precedent exists of consumers rejecting the primacy of convenience and low prices, where they have rebelled against homogenization.” He points to Americans turning away from the convenience foods of the 1950s: Wonder Bread, TV dinners, Twinkies, etc.

“A nontrivial percentage of the populace now stridently cares about what it puts in its mouths, which suggests it can be persuaded to apply the same care to what it ingests through the brain. Caring about the morality and quality of food has become a symbol of social status, which raises the question, why can’t concern for books, essays, and journalism acquire the same cachet?”

Foer advocates for a return to reading published text on paper.

“Paper—in the form of books, magazines, and newspapers—is the seam that we can inhabit. It’s the place beyond the monopolies, where we don’t leave a data trail, where we are untracked. When we read words on paper, we’re removed from the notifications, pings, and other urgencies summoning us away from our thoughts. The page permits us, for a time in our day, to decouple from the machine, to tend to our human core.”
….
“Indeed the entire history of the printed word points toward consuming books in such intimate settings, toward reading alone in our places of refuge. We choose to read in private to escape, but also because of the intellectual possibilities that this escape creates.”….“The act of private reading…provided the space for heretical thought.”

Fanon advocates a more radical solution: “…the colonized subject fights in order to put an end to domination. But he must also ensure that all the untruths planted within him by the oppressor are eliminated.”….“The major theoretical problem is that the insult to man which is in ourselves must be identified, demystified and hunted down in all times and in all places.”

We must expend the effort to actively take back our attention, our privacy, our humanity.

Foer quotes Louis Brandeis who once wrote, “The greatest menace to freedom is an inert people.”

But centuries before that, Socrates taught us, “Improvement of the mind is ingeniously affected by the prisoner’s own active desire, thereby making him first accessory to his own confinement.”

The Wretched of the Earth by Frantz Fanon, 1961.
[the 2004 Grove Press edition translated by Richard Philcox, with a Foreword by Homi K. Bhabha, and a Preface by Jean-Paul Sartre]

Zucked, Waking Up to the Facebook Catastrophe by Roger McNamee, Penguin Press, 2019.