Politics in the 1500s and Today 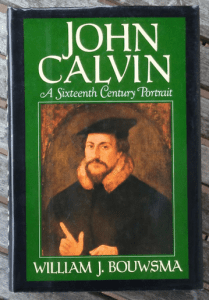 John Calvin (born in France in 1509 and died in exile in Switzerland in 1564) had some interesting things to say about politics—thoughts with lessons for us today.

I’ve been trying to understand the 1600s, and I’ve long believed that you can only understand an era by knowing what came before. So I picked up a book about Calvin because of his influence as a Protestant reformer. The book is John Calvin, A Sixteenth Century Portrait, by William J. Bouwsma, Oxford U. Press, 1988.

One surprising opinion in the book was this: “His identification by posterity with a body of thought known as ‘Calvinism’ would have given him particular trouble.” While devoutly Christian to be sure, Calvin’s thinking was considerably more balanced than today’s popular notions about Calvinism and Puritanism.

I was reading this book during the US House of Representatives impeachment of Donald J. Trump, and I was struck by some of Calvin’s thoughts on politics. Around this time Christianity Today, founded by the Rev. Billy Graham, and the flagship magazine of evangelical Christianity in America, published Mark Galli’s editorial condemning President Trump (Dec. 19, 2019, link below*). This seems like a peculiarly important moment to listen to John Calvin, so I sent the quotes below to Christianity Today in support of Galli’s editorial.

These thoughts are particularly worthy of our attention in today’s political climate.

“As kings are rarely ‘endowed with enough keenness and prudence to know how much is enough’ and are always likely to rule ‘immoderately,’ it is ‘safer and more bearable for a number to exercise government, so that they may help one another and teach and admonish one another; and if one asserts himself unfairly, there may be a number of censors and masters to restrain his willfulness.’” p 209-10.

“[Where] no one yields to others, everyone tests how much he can get away with. The result is freedom to plunder and ravage, deception and killing.” p 205.

“When tyranny has lost its concern for justice there are no limits to its wickedness; and lamentations do not soften it but aggravate its cruelty. And flatterers excite it by saying that the shortest way to control subjects and keep them quiet is so to oppress them that they do not even dare to open their mouths, and if they complain or murmur that they should be more harshly treated so that they may be hardened to servitude and, as it were calloused to bondage. Tyrants therefore do not rest from their injuries and contumelies until the wretched people have altogether given up.” p 207-8.

“Those who obey the wicked commands of men, he [Calvin] commented, ‘display by their cowardice an inexcusable contempt for God.’” p 209.

“I am so far from forbidding them [lesser magistrates] to withstand the fierce licentiousness of kings in accordance with their duty that, if they wink at kings who violently fall upon and assault the lowly common folk, I declare that their dissimulation involves nefarious perfidy, because they dishonestly betray the freedom of the people, of which they know that they have been appointed protectors by God’s ordinance.” p 209.

“The administration of ‘justice’ means, in addition to punishment, protecting the weak and helpless (especially widows, orphans, and strangers), and ensuring that all receive their due.” p 210.

“The function [of civil government] among men is no less than that of bread, water, sun, and air; indeed its place of honor is far more excellent. For it does not merely see to it…that men breathe, eat, drink, and are kept warm, even though it surely embraces all these activities when it provides for their living together….but…that humanity be maintained among men.” p 213

May these thoughts resonate with all of us during this difficult time in America’s history.