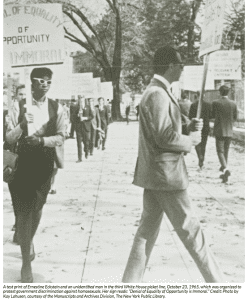 That’s Ernestine in the white-framed sunglasses. Her sign reads:
“Denial of Equality of Opportunity is Immoral.”
Photo from the Making Gay History website, referenced below.

I recently discovered the Making Gay History podcast, now in its fourth season, and I can’t praise it enough. Their most recent podcast features a1965 audio-taped interview with Ernestine Eckstein (1941-1992), an early African-American lesbian activist who was for a time vice president of the New York chapter of the Daughters of Bilitis. She was the only woman of color to join the 1965 picket line for gay rights in front of the White House.

Listening to the interview I was reminded how hostile the world was toward homosexuals in the early 1960s and how closeted homosexuals were required to be if they didn’t want to lose their jobs and face social ostracism.

As an example of the social revolution taking place in the 60s, I’ve always been impressed by the movie Coming Home with Jane Fonda, Jon Voight, and Bruce Dern, which portrays the rapid changes in dress, style, and attitudes from the time of JFK and Jackie’s pill box hats to the time of the hippies, psychedelic drugs, protest music, and the antiwar movement of late 60s. That is to say nothing of the Stonewall riots in 1969—a historic event that I was not even aware of until much later. My partner, who was in the armed service at the time, read about the riots in The Village Voice—his subscription was an act of resistance in the military. (Wikipedia states that Voice reporters “were among the first journalists to record the event, [one] being trapped inside the bar with the police, and [another] reporting from the street.”) Even in those tumultuous times, I did not feel safe “coming out” to more than a small circle of friends.

The Making Gay History podcast highlights Ernestine Eckstein’s use of the term “come out.” It wasn’t commonly used at the time. You were more likely to hear more circumspect terms like “revealing ourselves,” “becoming more visible,” or “taking off the mask.”

EE (Ernestine Eckstein): Well, one thing I would like to see is a kind of respect for self-development among all homosexuals so that they can, they can date in public, for instance, you know, openly….I think it’s a personal thing….
BG (Barbara Gittings): But do you think it’s possible in the present climate of opinion for homosexuals who have self-confidence in themselves to do this openly?
EE: I think it takes a lot of courage, and I think a lot of people who do it will suffer because of it. But I think any movement needs a certain number of courageous martyrs. There’s no getting around it. That’s really the only thing that can be done, you have to come out and be strong enough to accept whatever consequences come.

In expressing this attitude, Eckstein presages Harvey Milk’s 1978 exhortation, more than ten years later, for all homosexuals to come out of the closet:

Another example of Eckstein’s forward thinking is her view that the rights of transvestites to dress as they please is very much in the same vein as the fight for homophile rights.

EE: There are certain broad, general problems that we all have as homosexuals, you know, across the board, so to speak. And we should concentrate on those: the draft, civil service employment, the church rejection of us, this kind of thing that touches us all. Maybe even the question of transvestites, I think this has been neglected. Anything that can affect us all.

KL (Kay Lahusen): I’m surprised you threw that in, the transvestites. You mean that we should think about their right to dress as they please without discrimination or…?

EE: You see, I feel that the homophile movement is only part of a much larger movement of the erasure of labels. And I think the right of a person to dress as he chooses must necessarily follow when we expand our own philosophy of bringing about change for the homosexual….I see no reason why we cannot begin to expand into other areas. And this one is so closely allied to our own.

Commenting on this part of the interview historian Marcia Gallo interjects, “So she’s sort of forsaging the LGBTQ etc. kind of momentum of the movement,” long before activists began using the now-familiar term “intersectionality.”

I plan to keep listening to upcoming Making Gay History podcasts, besides going back to check out the episodes from previous seasons. I encourage you to do so too. It’s inspiring to hear about these early personalities who are responsible for making it possible to look back and see how far we have come. Their examples give us encouragement to keep moving forward, even when times look dark.