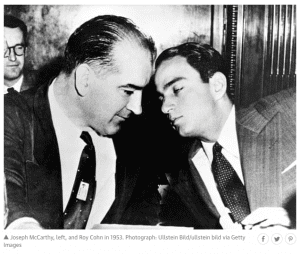 Medical historian Merilee D Karr alerted me to a recent Guardian article about a new book: Ike’s Mystery Man, Peter Shinkle’s biography of Robert Cutler. “…the big headline is about Cutler’s shepherding of a disastrous 1953 executive order under which the lives of thousands of federal employees were destroyed just because they were gay.” The irony is that in the era of McCarthyism Cutler himself was gay, or as they said back then—before the term “gay” came into general use—“homosexual.”

“Shinkle correctly identifies two landmark events for gay Americans which happened in 1948 and helped launch “a revolution in public perceptions”: “…the publication of both Gore Vidal’s bestselling novel The City and the Pillar and Sexual Behavior in the Human Male by Alfred Kinsey, which reported that 37% of all males had had at least one homosexual experience in their adult lives. Shinkle has an intriguing theory: ‘By raising homosexuality in the public consciousness, the Kinsey and Vidal books may have contributed to a period of heightened discrimination’ after the relatively permissive years of the second world war.” (See The Guardian article, referenced below.)

This captured my attention because I grew up in the 1950s. I may be the victim of an overactive imagination, but I have a vague memory of seeing some of the Army-McCarthy hearings on television. Wikipedia dates the hearings, covered gavel-to-gavel by ABC, from April to June, 1954, when I was 7 years old. We got our first TV set (black and white, of course) when I was 6, so it is possible that my memory is correct.

While I had no words for my homosexual feelings back then, I recognize now that I was experiencing those predispositions starting in those early years. If indeed I did see the Army-McCarthy hearings, I may have intuited that my feelings were taboo, since Wikipedia states that “a portion of the hearings assessed the security risk of homosexuals in government. The issue remained an undercurrent throughout the hearings.”

This background places me in solidarity with David Savran who writes: “…this book represents my own attempt to theorize a male subjectivity and sexuality less destructive and stultifying than the one on which I grew up.” See his book Communists, Cowboys, and Queers, the Politics of Masculinity in the work of Arthur Miller and Tennessee Williams, 1992, (p. x of the Preface).
Tennessee Williams and Gore Vidal again figure in Robert J. Corber’s 1997 book Homosexuality in Cold War America, Resistance and the Crisis of Masculinity. He writes, “One of the purposes of this project is to clarify this aspect of postwar gay male cultural production by examining the work of Tennessee Williams, Gore Vidal, and James Baldwin in the context of the national common sense that emerged in the 1950s in response to the threat Communists, homosexuals, and lesbians allegedly posed to the nation’s security.” (p. 3)

Years later in 2004 David K. Johnson would write, “Unless pressured, government officials often hid behind the generic term ‘security risk’ when they were really talking about homosexuals.” See The Lavender Scare, the Cold War Persecution of Gays and Lesbians in the Federal Government, p. 9.

But this animosity toward gays was neither instigated by nor maintained by Joseph McCarthy alone. Johnson explains: “The association of the antigay purges with McCarthy not only serves to marginalize them but also suggests that they lasted only as long as McCarthy’s tenure in the spotlight—from his Wheeling, West Virginia, speech [claiming that 205 card-carrying Communists were working for the State Department] in February 1950 until his censure by the Senate in December 1954. It ignores how the purges predated McCarthy, became institutionalized within the federal loyalty/security system, and continued to be standard government policy until the 1970s.” (p. 4.) While many Communists, former Communists, or Communists sympathizers were harmed by McCarthy and the House Un-American Activities Committee, “the lives of thousands of federal employees were destroyed” as a result of Eisenhower’s “1953 executive order” targeting queers. (See The Guardian article).

As Johnson puts it, “There were no dramatic confrontations between congressional committees and accused homosexuals, as there were with accused Communists, to capture the nation’s attention. Such encounters occurred not under the Klieg lights of a Capitol Hill hearing room, but in private, cramped, non-air-conditioned security interrogation rooms throughout Washington.” He spells it out: “Almost all of those accused [of being gay] quietly resigned rather than risk further publicity.” (p. 5 and 3.)

Now we have Shinkle’s book, based on Cutler’s six-volume diary and hundreds of letters, and as The Guardian says, “…like far too many, [Cutler] was perfectly willing to promote discrimination against other homosexuals, if it would help deflect suspicion from himself.”

McCarthy’s political fortunes began to decline during the Army-McCarthy hearings, where the Senate Subcommittee on Investigations was served by McCarthy’s Chief Committee Counsel Roy Cohn. The Guardian states that “McCarthy, his evil henchman Roy Cohn and their ally, Vice-President Richard Nixon, made themselves notorious by persecuting former communists and current homosexuals who they argued were mortal threats to the government. (Twenty years later, Cohn became the tutor in the dark arts of bluster and bullying for another Washington disrupter: Donald Trump.)” During the hearings Army Counsel Joseph Welch eventually confronted McCarthy by saying, “Until this moment, Senator, I think I never really gauged your cruelty or your recklessness.” He ended with the now famous words “Have you no sense of decency, sir?”

In recent months we have seen Trump’s transgender military ban, his threats to appoint Supreme Court Justices who would overturn marriage equality, and his support for a bill that would give special protections to homophobes who claim religion as justification. With all that, besides his many cruel and reckless innuendoes, fabrications, and outright lies, we should ask that same question of the current “Washington disrupter”:
“Have you no sense of decency, sir?”
This would be a rhetorical question in the case of the current White House. We already know the answer.

Accessed: 01-06-2019
https://www.theguardian.com/books/2018/dec/30/ikes-mystery-man-review-robert-bobby-cutler-peter-shinkle
“Ike’s Mystery Man review: astonishing tale of a gay White House aide,”
Sun., 30 Dec, 2018, by Charles Kaiser, the author of The Gay Metropolis: the Landmark History of Gay Life in America, a new edition of which will be published in 2019.

David Savran, Communists, Cowboys, and Queers, the Politics of Masculinity in the work of Arthur Miller and Tennessee Williams, U. of Minnesota Press, 1992,

David K. Johnson, The Lavender Scare, the Cold War Persecution of Gays and Lesbians in the Federal Government, U. of Chicago Press, 2004.

Accessed 01-06-2019:
https://www.theguardian.com/us-news/2016/apr/20/roy-cohn-donald-trump-joseph-mccarthy-rosenberg-trial
“A mentor in shamelessness: the man who taught Trump the power of publicity,” by Michelle Dean, 20 April 2016.