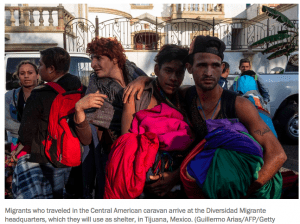 I recently spent a large part of an afternoon at the Department of Motor Vehicles waiting to renew my driver’s license. While waiting, I was reading about the collision of cultures of three peoples on three continents—Europeans, Africans, and indigenous Americans—occasioned by the “Columbian Moment” of 1492, a term favored by historian Marshall C. Eakins of Vanderbilt University.

There before me in the waiting room and behind the official counters were African-Americans, Hispanics, Asians, Caucasians, Muslim women in hijabs, and others of unidentifiable background, some speaking languages that I could not put a name to. This was living proof of these cultural collisions and subsequent waves of immigrants to the shores of the USA. With the exception of the indigenous Americans, we are a nation of immigrants.

Today the Trump administration is demonizing immigrants traveling toward the US southern border in a caravan from Central America, declaring that many of them are criminals. In fact, these refugees are fleeing from criminals—gang members and drug cartels—that have taken control of their local governments and are making their lives intolerable. Of special concern to me is a contingent of LGBT+ migrants who split off from the caravan because they were being discriminated against by their fellow travelers. From a report in The Washington Post:

“We were discriminated against, even in the caravan,” said Erick Dubon, 23, from San Pedro Sula, Honduras, who has been traveling with his boyfriend, Pedro Nehemias, 22. “People wouldn’t let us into trucks, they made us get in the back of the line for showers, they would call us ugly names.”

This is not the first time migrants to the US have been demonized. Former Attorney General Jeff Sessions praised the Immigration Act of 1924, the Johnson-Reed Act, which put a limit on the various nationalities to be admitted to the US. An immigration quota of 2% of each nationality present in the US in the 1890 census was imposed by this act. The legislation was designed to dramatically limit Southern and Eastern Europeans—Greeks, Italians, Jews—as well as Africans and Middle Easterners. Asians were completely excluded from immigrating. The formulation of this statute was influenced and supported by the Ku Klux Klan of the 1920s. Aspects of these issues are described in some detail in my Medicine for the Blues trilogy.

Over the decades, immigrants have been constructing our buildings, our roads, and our rail lines. They have tended and picked our crops, prepared our food, and cleaned our homes. Not only have they been working, paying taxes, and serving in our military, but they have won numerous Nobel prizes for our country and written a remarkable variety of influential books and literature.

My hope is that with a future change of administration, the US will again become a refuge for those fleeing persecution and once again welcome people from different backgrounds who will continue to enrich our culture and contribute their energies to rebuilding our nation, our infrastructure, and our moral authority.