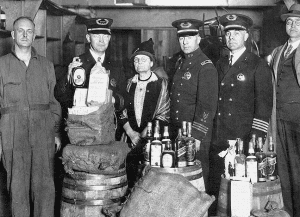 The long struggle for passage of alcohol prohibition was bound up with the long struggle for women’s suffrage. Opponents of prohibition knew that once women got the right to vote, they would work to restrict the consumption of alcohol. Excessive drinking among the working class was associated with the inability to keep a job and support a family as well as the abuse of spouses and children.

In 1904 when the Local Option Act passed in Oregon, women of the Anti-Saloon League began working county by county to turn the state dry. E.S.J. McAllister, an attorney recently arrived in Portland, became a regional organizer for the League. He was later exposed as a homosexual in the 1912 vice clique scandal in which the lives of a number of Portland professional men were ruined. Oregon women won the right to vote in 1912, and as predicted, state-wide Prohibition passed in 1914, effective in 1916.

City councilman George Baker ran for mayor of Portland in 1917 and won on a platform of getting tough on crime (bootlegging) and labor radicals (the Industrial Workers of the World, Wobblies), while supporting business elites and the patriotic cause of involvement in World War I, just authorized by the US Congress. Amidst the distraction of all these issues, Baker’s police chief Leon Jenkins set about taking control of bootlegging and rumrunning, while staging frequent well-publicized raids to convince the public that the police were enforcing the anti-liquor laws. Only a fraction of the confiscated booze was publicly disposed of, while behind the scenes the majority of it was stored in the police Central Precinct evidence room and secretly distributed to Mayor Baker and his friends, and to a network of “officially” approved speakeasies and blind pigs that were allowed to operate while the police took payoffs to look the other way. When Prohibition became national law in 1920, Portland had a head start in mastering its management.

The Canadian cities of Vancouver and Victoria had a long history of trade with the city of Portland, significantly the smuggling of Chinese opium in the 1890s. So when Prohibition became law, it was opportune to switch from opiates to bonded whiskey. While Portland gained the reputation for strong enforcement of anti-liquor laws in 1922, it became the prime distribution point for bonded liquor. With a police stranglehold on the supply, the price of whiskey in Portland was one of the highest in the nation. The wealthy and well-connected were making a killing, while the showy raids and arrests of low level drinkers and distributors were putting working class citizens in jail.

Web link to above photo:
https://oregonhistoryproject.org/articles/historical-records/temperance-worker-with-portland-police/#.Wsl4I8gh2-4

“Bootleggers and the Repeal of Prohibition,” Oregon Secretary of State website:
http://sos.oregon.gov/archives/exhibits/highlights/Pages/prohibition-bootleggers.aspx