The “War on Christmas”…Then and Now 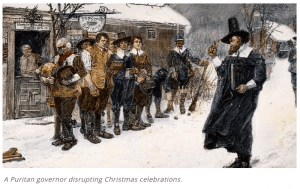 We hear a lot in this season about the “War on Christmas,” but today’s war is nothing like that of the 1600s.

Soon after the Puritan-controlled government executed King Charles I in 1649, they abolished Christmas observances in England. Puritans believed the holiday was associated with Roman Catholicism, and though the Church of England had broken with the Pope, Puritan reformers sought to bring the Anglican Church even more in line with their beliefs. They also considered Christmas a pagan festival, because the early Catholics had supplanted the Roman winter solstice festival  with a celebration of the birth of Christ. In England of the 1600s, the tradition was to celebrate Christmas with twelve days of feasting, drinking, gambling, and licentiousness. Some activities included cross-dressing by men and women and going to the houses of the wealthy demanding their finest food and drink, and if refused, threatening vandalism or violence, like today’s Hallowe’en “trick or treat.”

In 1620 Puritan separatists, who came to be known as the Pilgrims, sailed from England to found the Plymouth Colony, seeking religious freedom from the repressive Church of England. They were followed in much larger numbers by non-separatist Puritans, who settled in Salem and Boston to worship in ways they considered more pure than the practices of the Anglicans. The same anti-Christmas sentiments from England were held by the New England colonists, and as thousands more Puritan colonists arrived in the new world, they eventually passed laws criminalizing Christmas celebrations, requiring shops and schools to remain open and churches to remain closed. Colonists caught celebrating the holiday publicly were fined five shillings, a hefty amount in those days.

After the Restoration of the British monarchy, in 1660, the ban on Christmas was repealed in England, and finally in 1681, under pressure from the motherland, Massachusetts also repealed its ban.

Later in the USA

However, resistance to Christmas celebrations persisted in New England, and it was not until 1856 that Christmas became a public holiday there. By the early 1800s, Christmas observance had become popular in the American South, and after the US Civil War, President Ulysses S. Grant made Christmas a national holiday in 1870 to help heal the animosity between North and South.

Moving forward to 2005, Fox News host Bill O’Reilly promoted John Gibson’s book The War on Christmas: How the Liberal Plot to Ban the Sacred Christian Holiday Is Worse Than You Thought. As part of O’Reilly’s focus on culture wars, he returned to this subject year after year. The New York Times reported, “A study by Fairleigh Dickinson University found that watching Fox News increased the likelihood that someone would believe in the War on Christmas by 5 to 10 percent.” (See the article referenced below.) Then in 2015, early in his campaign for office, Donald Trump brought up the theme of a “War on Christmas” and has returned to it many times since.

Let’s hope and pray that this current controversy does not lead to legislation specifying the ways in which Christmas may or may not be observed or to anything like the English Civil Wars.

same illustration from the historyofmassachusetts.org article, below, captioned “The Puritan Governor interrupting the Christmas Sports, illustration by Howard Pyle, circa 1883”

“When Christmas Was Banned in Boston”
by Rebecca Beatrice Brooks, Dec. 5, 2011
Illustration: “A 1659 public notice about the ban on Christmas celebrations”