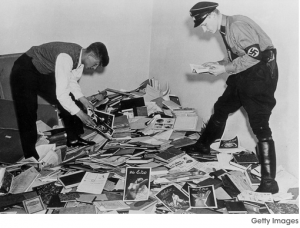 image from “LGBTQ Institute in Germany Was Burned Down by Nazis,”
by Lucy Diavolo, Sep 20, 2017  –  teenvogue.com

During this Pride Month, I am working with others toward a possible grant for the Gay & Lesbian Archives of the Pacific Northwest (GLAPN). This has set me to thinking about values and missions.

Many people today would have the LGBTQ community disappear—out-of-sight/out-of-mind and erased from history. Numerous gay community centers across the nation have been vandalized and terrorized with death threats since Donald Trump’s inauguration. (See Advocate below.) This is reminiscent of the German Nazis, who took 20,000 books from the Institut für Sexualwissenschaft (Institute of Sexology) and burned them in the streets in 1933. It was “an attack on information” and destroyed the life’s work of Magnus Hirschfeld, the founder of the Institute, which had been doing pioneering research into sexual reassignment surgery. (See Teen Vogue below.) Today the transgender community in America is similarly under attack.

One of the commitments of the Pride Foundation and their community grant program is “to address the root causes of discrimination.” The founding purpose of GLAPN is “to serve the greater public interest in advancing the visibility of queer cultural history.”

The root causes of discrimination against our LGBTQ community are prejudice and ignorance. By advancing the visibility of queer cultural history GLAPN is helping to educate the public. Hope springs eternal that opening the eyes of the general population will combat bias and lack of understanding. The AIDS epidemic and the outing of celebrities like Rock Hudson helped Americans understand that anyone might be gay and that not all LGBT folks fit the common stereotypes.

Opponents of our community would like to see our history erased. They would deny the scientific evidence that homosexuality is not a mental illness, instead clinging to beliefs that sexual orientation is a choice and that conversion therapy works—ideas that have been fully discredited.
“…in 1952, when [the American Psychiatric Association] published the first edition of the Diagnostic and Statistical Manual (DSM-I), it listed all the conditions psychiatrists then considered to be a mental disorder”—including homosexuality. (See NCBI below.)
A year later, “Evelyn Hooker, PhD, applied for a National Institute of Mental Health (NIMH) grant to conduct research on ‘normal homosexuals.’ During this period of American history, Sen. Joseph McCarthy was seeking out communists wherever he suspected they might be lurking; homosexual acts were a crime; bomb shelters were springing up in backyards; and the term ‘normal’ homosexual was thought to be an oxymoron.” (See APA1 below.)
Hooker’s groundbreaking 1956 study, demonstrating that homosexuals are psychologically normal, helped overturn the American Psychiatric Association’s classification of homosexuality as a mental disorder and spurred their condemnation of conversion therapy. Hooker was a long-time advocate of “a scientific view of homosexuality.”
In 1973 the American Psychiatric Association determined that homosexuality is not a mental disorder and removed it from the DSM. (See APA2 below.)

We all know examples of long-held beliefs that are proved inaccurate but still hold sway for many years. Though it was believed the world was flat, Columbus and Magellan disproved this by sailing the around the globe. It was long believed the Earth was the center of the universe, yet Galileo upended that theory, earning the animosity of the Catholic Church. And in our own time, many people contest the overwhelming scientific evidence of systemic global climate disruption.

In the late 1800s and early 1900s, the eugenics movement believed they could eradicate criminality, feeble-mindedness, and sexual deviance by sterilizing people who supposedly fit into those categories, believing this would prevent them from passing on their genes. These beliefs have also been scientifically debunked, and later in the 20th century, eugenic sterilization laws were overturned in Oregon and around the country.
Two other important notes:
“After World War II, the practice of ‘imposing measures intended to prevent births within [a national, ethnical, racial or religious] group’ fell within the definition of the new international crime of genocide, set out in the Convention on the Prevention and Punishment of the Crime of Genocide.” (See Wikipedia below.)
“The eugenics craze was already fading when the horrors of institutionalized eugenics revealed in Nazi Germany during World War II doused it entirely as a movement.” (See PBS below.)

Preserving our history and holding to evidence-based information, as opposed to “alternative facts,” pseudo-science, or doctrinaire beliefs, we have a better chance of fighting inaccurate views and bigoted opinions. The Pride Foundation values courage and understands that “social change requires us to stand up for our beliefs.” We must also stand up and confront misinformation being disseminated regarding our community.

This month, especially, be proud of how far the LGBTQ community has come, while we continue our work to promote understanding and acceptance.

Teen Vogue: https://www.teenvogue.com/story/lgbtq-institute-in-germany-was-burned-down-by-nazis
“LGBTQ Institute in Germany Was Burned Down by Nazis,” by Lucy Diavolo, Sept. 20, 2017.

APA2: https://www.psychiatry.org/news-room/apa-blogs/apa-blog/2016/03/homosexuality-as-a-mental-disorder-simply-not-backed-up-by-science
“Homosexuality as a Mental Disorder Simply Not Backed Up by Science,” by Saul Levine, MD, MPA, Mar. 10, 2016.